Dr. Haijo Westra, Prof. Emeritus, University of Calgary, who is well-known to many of you and last contributed a fascinating lecture to our research cluster a couple of years ago, will give a talk on:

“A-Dieu A LA NOUVELLE-FRANCE”, a poem dated 30 July 1607, written by Marc Lescarbot who spent a year at Port Royal (now Annapolis Royal in Nova Scotia). This poem is really a rhymed prospectus of the resources of the country and an invitation to invest in their exploitation. The aim of the paper will be to elicit the motivation and the strategies of representation, focusing in particular on the attitudes towards nature and autochthonous peoples, while comparing this text with others like it.

The talk will be in English.

This event is sponsored by the Department of French, Hispanic and Italian Studies and by Saint John’s College.
It will be of interest to faculty and students in the areas of French Literature, History of Canada,  Early Modern Studies, Colonialism, Oecology, among others.

See below:  Lescarbot’s 1609 map, from the Gutenberg project edition of his History of New France.
Other period maps will be shown during the presentation. 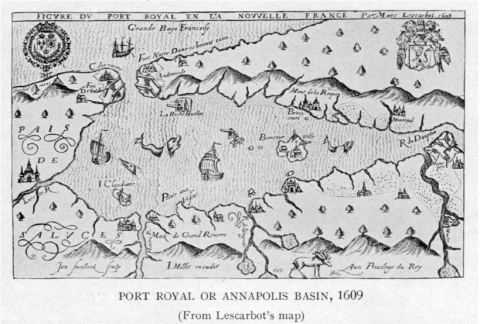