Early Music Vancouver presents a three-concert series featuring Sequentia and Dialogos on the 22nd, 24th, and 26th of January, 2010.
Preceded by an introductory lecture by Chantal Phan on the 14th of January.

Voices of the Medieval Lady: Music and Poetry of the Female Troubadours
A lecture by Chantal Phan, part of Green College’s Early Music Series: Green College and Early Music Vancouver have collaborated to showcase a series of lectures that aim to encourage an appreciation and understanding of music within an historical context. The lectures will also serve as in-depth introductions to repertoire to be performed at upcoming Early Music Vancouver concerts.

The Rheingold Curse
A Germanic Saga of Greed and Vengeance from the Mediæval Icelandic Edda
Sequentia, directed by Benjamin Bagby, presents a programme of poems from the Old Icelandic Edda, with instrumental accompaniment and interludes.

Barlaam and Josaphat
Mediæval Wanderings of a Cosmopolitan Legend
Dialogos, directed by Katarina Livljanić, presents the incredible story of Josaphat and his master Barlaam: a Christianized version of Buddha’s life.

Project made possible through the generous support of Elaine Adair; in cooperation with the UBC School of Music and supported by the Department of French, Hispanic and Italian Studies at UBC. 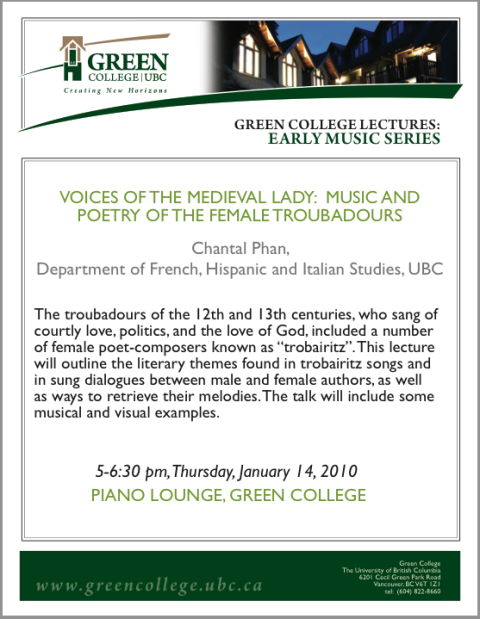