If you’re at UBC or in the Vancouver area and you’ve enjoyed and been enriched by the work of the Early Romance Studies Research Cluster and its approaches over the last eight years, you may be interested in the following research clusters / groups / gatherings with which ERS members and previous participants intersect: 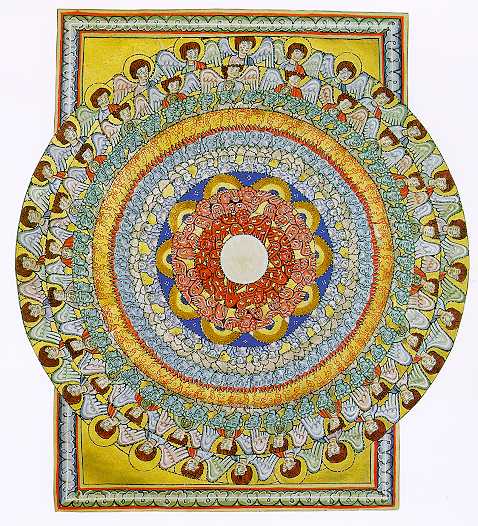 “Vision of the angelic hierarchy.” From the Scivias, Hildegard of Bingen (before 1151; 12th c. ms)
Modern copy from the (now lost) Rupertsberg ms, made at the Hildegard Abbey, Eibingen (1927-33)
Image source: Wikimedia Commons

Part of the FHIS Research Seminar

Book launch: the collected volume from the 2012 UBC Medieval Workshop, edited by Prof. Frelick, who was one of that conference’s organisers.

Claudio Turza (Royal Academy of Spain)
“The Origins of the Spanish Language”
Wednesday 29 March at 3:00 p.m.
Buchanan Tower 799
jointly with the Hispanic Research Seminar
(NB this talk will be in Spanish)

Everyone is welcome. Please join us!

23 November 2016 Comments Off on Jennifer Nagtegaal: “To engulf an empire: Cannibalism and translatio imperii in La Numancia”: Thursday 1 December 2016

The pervasiveness of blood and bodily suffering in Cervantes’ La Numancia (ca. 1581) has captivated literary critics for decades. However, they have scarcely made mention of the cannibalistic ritual that occurs in the third act; the savage practice, according to French anthropologist Claude Lévi-Strauss (1961: 385) “that we find the most horrible and disgusting.” The literary representation of cannibalism, long marginalized in scholarship, has only recently seen the limelight of scholarship. We analyse this act with the purpose of shedding new light on the classic and automatic identification Numantia-Spain, thus also entering the existing debate about the interpretive ambiguity of the play.

The talk will be in English. All are welcome to attend. Please see the poster below (downloadable PDF) for more details and please do share with anyone who may be interested in attending. 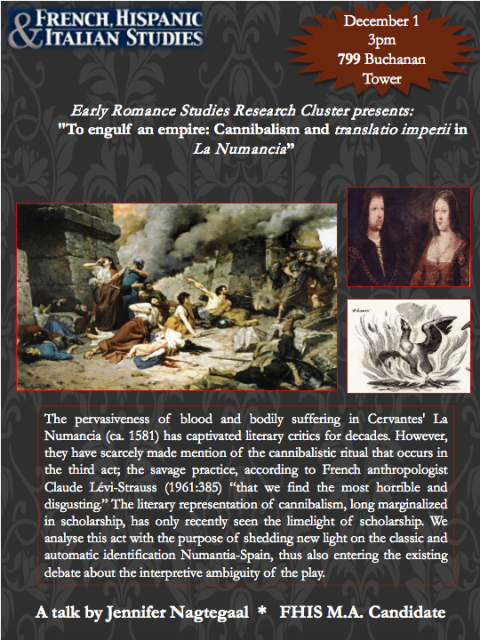 After this week’s exciting lecture on Christine de Pizan by Dr. Tania Van Hemelryck (Louvain), for our next talk we turn to earlier medieval documents as we welcome Dr. Evina Steinova as presenter. END_OF_DOCUMENT_TOKEN_TO_BE_REPLACED

On Christine de Pizan and authorship.

With the support of the Department of French, Hispanic and Italian Studies; the Dorothy Dallas Fund; the Faculty of Graduate Studies; and the Early Romance Studies Research Cluster

END_OF_DOCUMENT_TOKEN_TO_BE_REPLACED

“Specular Reflections: The Mirror in Medieval and Early Modern Culture.” 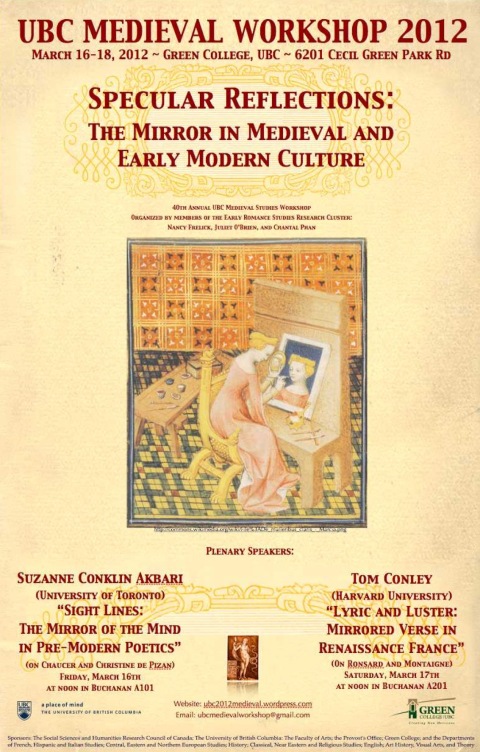 (Click on the image to link to the full programme)

From the publishers, Brepols:

END_OF_DOCUMENT_TOKEN_TO_BE_REPLACED

The 15th Biennial Romance in Medieval Britain brings more than 60 scholars from 7 different countries to present their research in the field of Medieval Romance in Britain. Romance, a wide-spread popular narrative genre within medieval Europe, saw a profound flowering within the literatures of medieval Britain between the twelfth and early sixteenth centuries. Poets produced romances for a wide range of audiences – courtly, gentry, mercantile, and popular – and upon a dizzying range of subject matter. In medieval Britain romances were produced and consumed in Middle English, Anglo-Norman and Continental French, Latin, Norse, Scots, Welsh, Cornish, and Irish, positioning romance as a genre that is reflective of the cultural and linguistic diversity of the medieval British archipelago.

The conference description, information, and the program can be found here:

If you are interested in attending the conference or have any questions, please do not hesitate to contact Robert Rouse at robert.rouse@ubc.ca

Call for Papers: Occitan literature at the MLA (January 2017, deadline for proposals 20 March 2016)

MLA CFP DEADLINE 20 MARCH
1. Boundary Conditions and Troubadour Texts
What boundary conditions define troubadour texts? How do politics, genre, dialect/language, and country of origin determine critical approaches to the troubadours? Do scholars read Italian and Catalan troubadours the same way as Occitan ones? How do manuscript transmission and nationality define the field?
The MLA Occitan Language, Literature, and Culture Forum is calling for abstracts (250 words or less) for 15-20 minute papers that examine the troubadours within the context of the 2017 Presidential Theme: Boundary Conditions: https://news.commons.mla.org/2015/12/30/2017-presidential-theme-boundary-conditions/
Please send abstracts or enquiries to Courtney Wells (wells@hws.edu) by March 20, 2016.
2. Sound(s) of French and Occitan Lyric
Music, sound, noise, silence; performed lyric–historical/ represented, actual/imagined; sonorities evoked by lyrics –human, avian, animal, inanimate–or by manuscript contexts; lyric silences/silencing lyric.
The MLA Medieval French and Occitan LLC Forums are calling for abstracts (250 words or less) for a joint session of 5 speakers
Please send abstracts of 250 words or less to Sarah Kay at hsk8@nyu.edu.
Additional enquiries may be sent to wells@hws.edu or ddelogu@uchicago.edu

Kwame Anthony Appiah, the 2017 MLA president, has chosen Boundary Conditions as the presidential theme for the 2017 convention, which will be held in Philadelphia. Boundary conditions are, for mathematicians, the parameters that define the space in which one seeks solutions. So the theme offers, first, an invitation to reflect together on the parameters that determine our work. Our boundary conditions are sometimes spatial, sometimes identitarian, sometimes disciplinary and subdisciplinary, and boundaries themselves are sites of artistic production and of scholarship. As students of language and literature increasingly cross national boundaries, physically and virtually, we face new questions about composition and critical analysis, second-language pedagogy, translation, and the ideas of global literature and transnational cultural studies. How do our new boundary conditions affect our understanding of the projects of literary and cultural studies? How do new forms of communication—online education, digital libraries, blogs, hypertext, machine translation, social media, and new tools of textual analysis—reshape the boundary conditions of our work? And how are these boundary conditions affected by the new material circumstances in our universities—the growth of the precariat, challenges from opponents of liberal education, clashing conceptions of freedom of expression? Visit the MLA Web site to post a call for papers for the 2017 convention.
UBC Early Romance Studies Research Cluster
Blog at WordPress.com.
Loading Comments...
Comment
×